Story by Dimeji Jagun & Wale Olukotun
Uncertainties still trails the selection of new Lagos State Polytechnic, Rector after the exit of Dr Abdulazeez Lawal in May, 2015, whose end of tenure was characterized by controversies.
The former Rector was accused of favouritism and manipulation of the process of selecting another Rector for the institution among others allegations with several petitions written to the former governor of Lagos State, Mr Raji Fashola, SAN.
It was gathered that this accounted for the refusal of the former governor in announcing the result of the screening which THE IMPACT gathered favoured alledged ‘anointed’ candidate of the former Rector.
Also accused is Otunba (Dr) Fatai Olukoga, former Special Adviser on Education who held forth in the foremost School of Technology for the former governor.
THE IMPACT gathered gathered that though, the former governor put the LASPOTECH issue, especially the Rectorship issue in the handover note for the new administration of Mr Akinwunmi Ambode, the new government may not do anything about the situation any time soon. 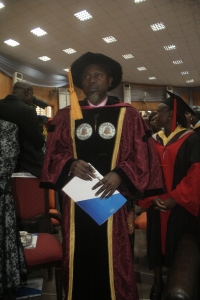 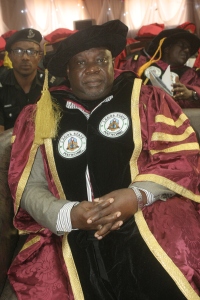 The group then called on the governor to investigate Engineer Olawunmi Gasper, the Special Adviser on Education, Otunba Fatai Olukoga and Special adviser on Environment, Lagos State for their roles individually and collective in the abuse of the process.
Another group named Concerned Lagosians in the School in a 7-page petition listed achievements of Dr Lawal among which are promoting many staff than any of his predecessors, establishment of two new schools, accessing TETFUND in building new structures and for staff Post-Graduate Studies both home and abroad among others, but inspite all these, “his administration is perceived to be dictatorial by many of the staff, characterized by high-handedness, intolerance and double-standard resulting in bending rules for his few favourites, majority of whom are Muslim brothers and sisters” they alleged.
Other sins are turning the monthly Academic Board meetings where decisions are taken into a place Board Members avoided and those that do attends are made to get briefings and order fro the Rector; decline of the school IGR due mainly to the Rector’s highhandedness; favouritism in the appointment of the new Deputy Rector (Academic), Mr Nurudeen despite not meeting the necessary requirements, recycling of favourites for juicy positions and preferential treatments in the award of TETFUND scholarship for PHD in foreign Universities among many others.
Like other petitioners, Concerned Staff of Lagos State Polytechnic, also petitioned against the Rector and Special Adviser on Education to the governor and made copies available to THE IMPACT.
Otunba (Dr) Fatai Olajide Olukoga has however denied any wrongdoing in his capacity as Special Adviser of Education and representative of the Governor in the school. The outgoing cabinet member asked members of the public and reporters to verify whatever claims by the petitioners before rushing to press
Meanwhile, THE IMPACT gathered that seven candidates applied for the Rectorship position of of Lagos State Polytechnic, Ikorodu with two applicants from Ikorodu- Barrister Olasunkanmi Longe, former Deputy Rector of the school and Dr Omobitan of Lagos State University. Others are Mr Samuel Sogunro, current Deputy Rector (Administration), Mr Kola Godonu of School of Agriculture, LASPOTECH, Mr Tajudeen Nurudeen, Deputy Rector (Academics), Dr (Mrs)Saheed of School Agriculture, LASPOTECH and Dr Adebayo of School of Management, LASPOTECH.
THE IMPACT gathered that the names of Dr Omobitan and Mr Samuel Sogunro are on top of the shortlisted candidates. Any of these two, we gathered may emerge as the next Rector of the Polytechnic.
It was gathered that highly placed Ikorodu people are lobbying for the position of Rectorship for an Ikorodu indigene as the host community, more so, that it has presented two credible candidates who are eminently qualified with one of them on the top of the list.
It was also gathered that proponents of Mr Sogunro are also not relenting. As a sitting Deputy Rector, Administration, he is at advantage. The staff of the school also seem to prefer a candidate from the school to emerge as the next Rector rather than an outsider.
Dr Abdulazeez Lawal has since vacated office after the expiration of his term and the Deputy Rector (Administration), Mr Sogunro had been announced as the Acting Rector pending the time a new Rector will take-over the administration of the school. 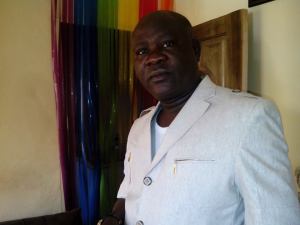 Kunle Adelabu
Mr Lanre Kuye, the Deputy Registrar, Information & Public Relations Officer of the Lagos State Polytechnic, Ikorodu has debunked allegations against the immediate past Rector, Dr Abisoye Lawal and ex-Special Adviser on Education as unscrupulous and untrue.
The school information officer made the declaration while responding to the allegations during a press conference at the school board room. He added that the petitioners are ghosts and that one Adeleke Waheed Aderibigbe is never a staff of the foremost school of technology as claimed in the petition.
“I am sure you are all aware of the petition flying round the state, titled, “flagrant abuse of due process and gang ups in Lagos State Polytechnic to suppress quality leadership in order to cover up dirty deals. I wish to categorically state that the content of the petition is totally unscrupulous.”
Responding to the allegations one after the other, Mr Kuye stated that the petitions and unwarranted allegations were fall-outs of the process to appointing another Rector for the school which he said is normal everywhere. He added that the Polytechnic envIronment is one big family that is ready to work in harmony with any of the candidates that emerge as the next Rector.
On the allegations that the process of new Rectorship was characterized by manipulations and designed to favour an anointed candidate, Mr Kuye stated that, “It should not raise any dust, because the moderator appointed respectable and people of honour and integrity to conduct the interview, there we had Commissioners, Special Advisers, Phillip Consulting and even a member of the Polythecnic Academic Board on the panel as an observer. The Rector was not even a member of the panel.”
On the allegation that the office of the Rector is selective and vindictive in punishing staff with reference to cases of Computer Science staff, Mr Kuye explained that the school followed laid down procedures in querying allegations against them and found guilty.
“Rules are generally applied and not targeted at anybody in the Polytechnic. As we speak, one of the demoted officers, Mr Saheed Adelanwa is currently in United Kingdom on a Scholarship for another Masters in Science in Computer Networking. So, where is the high-handedness?”
Mr Kuye further stated that Mrs Oshinde of the Hospitality Management Technology who was alleged to have been found guilty of a serious offense was equally punished by demoting her contrary to what was stated in the petition that she was not punished and was allowed to work freely because she is an in-law of the School Registrar.
The School Information Officer while stating that the school play no role in the failure of the state government in appointing Governing Council in the last two years, informed members of the press that as expected, the management of the school communicated the development to the governor and the need to appoint a new board through the Special Adviser to the governor, Otunba Fatai Olukoga, adding that there has not been any respond to this request.
He equally stated that despite the absence of the Governing Council, the school activities are being approved by an enlarged Management meeting.
“Even though we have no Governing Council in place, all our activities are approved by an enlarged Management meeting which comprises of all our principal officers and two Special Advisers to the Governor- Special Adviser on PMO and Education. So, the Special Adviser on Education do not have sole authority on any approval. The enlarged management meeting takes decision on all issues in the Polytechnic and not the Special Adviser on Education as alleged”
He added that records of these enlarged management meetings and resolutions which are conducted in the open are available for anybody in doubt.
It was also revealed that the out-gone Rector, Dr Abioye Lawal turned down opportunity to vie for another term since he is not affected by the new law of single 5year term. “Furthermore, though the new law of the Polytechnic allows the Rector to seek a fresh single term of 5years, but the Rector never applied” He then queried, “Why the allegation of seeking another 5-year term in office by the petitioners?”
Responding to the allegations that Haf-Hax Technology, Lastak and Wako Construction Company are been used by the former Rector, his personal assistant and the Registrar as conduit pipes, the Information officer stated that these companies that have with the Polytechnic long before the advent of the current management and also denied any link by the principal officers to the said companies.
While describing the petitioners as ghost who should be ignored, Mr Kuye stated that only 6 staff members are in the School Council Affairs and that the petitioner, Adeleke Waheed Olaribigbe was never a staff of he school.
“I wish to state here that we do not have anybody in the Polytechnic by the name Adeleke Waheed Aderibigbe (the petitioner). So, the unscrupulous allegations must be disregarded.”
Mr Kuye described the former Rector as a man that is very open, forgiving and not highhanded in any way and whose tenure has brought unprecedented growth to the school in term of academics, infrastructures, staff attitude to work and promote friendliness and peace in the Polytechnic community.
“Over 200 staff are currently pursuing their Masters and doctorate degrees in LASPOTECH. In School of Agriculture alone, we have over 6 PHD holders. The Rector has also been encouraging the staff to access the TETFUND grant and publish books. Also, in order to promote mutual harmony on campus, he usually holds regular meetings with Students’ Union body and other unions within the school community.”
He also described the relation between the school an its ost town as cordial and deny any deliberate attempt to prevent Ikorodu son from emerging Rector as insinuated in the petitions. The PRO also pledged continue harmonious working relationship with Ikorodu.