Collapsed roof of the Ipakan Stadium

The traditional head and residents of Ipakan community in Ijede Local Council Development Area (LCDA) have called on the Governor of Lagos State, Mr Akinwunmi Ambode and the Director of Sports Commission in the state, Mr Adewunmi Ogunsanya, for the repair of the Ipakan stadium which roof was blown-off by wind shortly after its completion about two years.

THE IMPACT gathered that since the roof of the stadium which has not been commissioned, was blown off in 2014, several team from the sports ministry have visited without any repair being carried out.

Chief Mustapha Lasisi, Baale Ipakan community, while recanting how the stadium was established said he was approached by the late Lagos State Sport Commissioner, Prince Adeniji Adele about eight years for space to build a sports centre in the community which was provided.

Another section of the collapsed roof of the stadium

“It was in 2009, that former Commissioner for Sports and Social Development, late Prince Adeniji Adele via a letter to the community requested for land of five hundred metres to build a stadium which was provided within time. We even paid for the survey and the ministry also investigated the genuiness of the land provided. We developed keen interest in the because we believed that it would go a long way in helping our youths to develop”

“It’s quite unfortunate that the stadium which has not been commissioned is in this state. It was in 2014 that the roof of the stand got blown-off and since then, we have approached the necessary authority and written letters for repair but all to no avail.”

He appealed to the governor and the newly appointed Director-General for Sports Commission with whom the community have also lodged complaints to help in repairing the stadium.

“I am appealing to the Governor and our own son who has just been appointed as the Director-General of the sports council, Mr Adewunmi Ogunsanya, to help in repairing the stadium by ensuring that it is captured in the 2017 budget” Chief Lasisi appealed.

James Precious is a member of a local football academy named Espanyol Football Club and the club has been in Ipakan for about three years. To them, the construction of the Ipakan sports centre is a dream come true but now turning to doom due to the state of the stadium.

According to him, “When we saw that the stadium has been completed, everything made sense to us because we can pursue our dreams as a club and as individual player but suddenly, the collapse and total neglect of what should have been a recreation centre for the youths and most unfortunate is the fact that nobody is doing anything about it.”

“Despite the state of the stadium, we have been making use of it and clearing the grass at our own expense. We want the government to fix the damaged cover and other things so that some of us that have interest in sports can pursue our dreams” Precious appealed to the concerned authority.

Mr Kunle Onila, a resident of the community who has been assisting the Espanyol players in funding the clearing of the grass also spoke with THE IMPACT during our visit to the sports centre in Ipakan.

“We are very disappointed with the current state of the stadium which was constructed with public fund and yet we are not getting the benefit. The guys called me each time the grass overgrown and they needed to clear it and have always rendered my assistance like what we are doing now.

“The entrance to the sports complex is impassable because of mould and weed but we always find our way inside. We have been seeing people coming around to snap pictures and assess the condition of the stadium but yet we have not seen any action. We want the government to consider the importance of this complex on the youths and the community in general and repair the stadium to put it in shape” Kunle appealed. 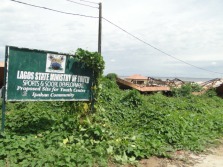 THE IMPACT also spoke with Mr Yinka Pratt, Chief coach of Obateru International FC, the current champions of the Lagos State League. He stated, “the state of the stadium had affected a lot of things, because it’s the only sport centre in the area, where athletes can train, be it football, basketball, boxing or volleyball but because of its bad condition, we have been unable to train. Everywhere is covered with weeds and if we cannot have good recreational centre, how are we expected to take the boys out of the street and get them engaged in sport?” Coach Pratt asked the government.

Meanwhile, several appeals across the division have also been made to the Lagos State Governmet, especially the Sports Commission under the headship of Mr Adewunmi Ogunsanya for the construction, completion and rehabilitation of stadia in Ikorodu division.