Cultism: Over 100 Youths In Ikorodu Surrender Arms To Lagos Police 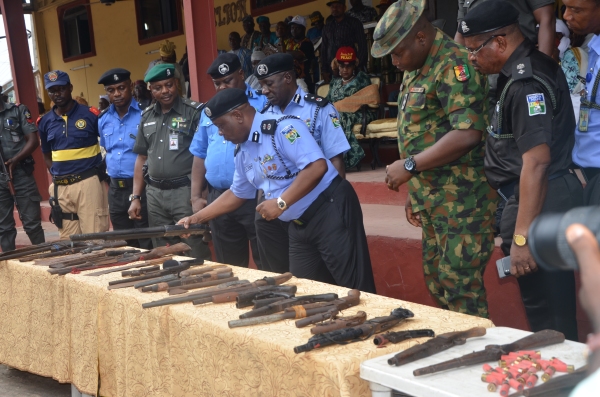 Mr Edgal Imohimi, Lagos Police Chief inspecting the surrendered arms and other weapons. with him were Col Benedict Eze, Commanding Officer, 174 Battalion, Odogunyan, Ikorodu (3rd from right), Assistant Police Commissioner (6th from left) and other senior police officers and other security agencies at the Ayangbure palace, Ikorodu on Monday

Over 100 members of the three rival cult groups in Ikorodu, Eiye, Aiye and Buccaneer Confraternities on Monday, February 12, 2018, surrendered arms and other dangerous weapons to the Lagos Police Command.

This is coming after about 8 months the repentant cultists denounced membership of the deadly groups and form alliance against crime and other violence acts.