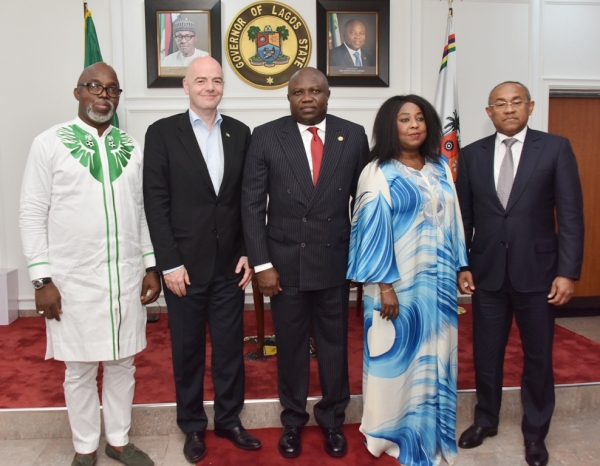 Lagos State Governor, Mr. Akinwunmi Ambode on Monday, February 19, 2018, evening said that the State has the capacity to host international football tournaments and use sports as a tool to showcase its rich tourism, hospitality and entertainment culture.

Governor Ambode, who spoke when he received the President of the Fédération Internationale de Football Association (FIFA), Gianni Infantino and his team on a courtesy visit to the Lagos House in Alausa, Ikeja, said the population, soccer enthusiasm and the tourism potentials that abound in the State are indicators to the fact that the State has the enabling environment to receive any FIFA projects in Nigeria.

The Governor, while welcoming the choice of Lagos as the host city of the FIFA Executive Committee Summit, said it would present a great opportunity for the State to showcase its huge investment in football development especially for youths and women.

He also expressed confidence that the FIFA President and his team, after the visit, would consider Lagos favourably to host a FIFA competition, while also pledging support for events by the world’s football governing body.

“I want to say that we are so excited that Lagos is playing host to the FIFA Executive Summit, we would be the second African city that would be hosting this kind of meeting and we are excited that you decided that Lagos would host it.

“I believe as you decide tomorrow and then days after on where you intend to put your projects, Lagos stands to welcome all the projects of FIFA. We have the population, the enthusiasm and we also have the tourism potentials to actually receive any FIFA projects in Nigeria,” Governor Ambode said.

Besides, Governor Ambode thanked Infantino for deeming it fit to select a retired Chief Judge of Lagos, Justice Ayotunde Philips as a member of the Ethics Committee of FIFA, saying that it was a testament to the State’s credibility.

“I want to personally thank you for selecting one of our retired Chief Judges, Justice Philips into the Ethics Committee of FIFA and that happens to be one of the most important committees in FIFA and I believe strongly that for us to have produced one of those members goes to show how credible that we can be in Lagos,” he said.

Governor Ambode who also spoke at the Nigeria Football Federation (NFF/Aiteo) Awards held at Eko Hotels and Suites, Lagos, said that partnering with the NFF for the hosting of the award was also a privilege to showcase the Lagos as the emerging sports hub for Africa.

“What we are saying to the world through these partnerships and our other sports programs like the Lagos City Marathon, International Table Tennis Federation Nigeria Open, the Lagos International Sports Classics in Squash Racquet, Badminton and Taekwondo is that Lagos is ready to host the world; and use sports as a tool to showcase our rich tourism, hospitality and entertainment culture,” he said.

While wishing the FIFA delegation a successful execution of the World Cup scheduled to hold later in the year, Governor Ambode expressed optimism that the Super Eagles of Nigeria could spring surprises and emerge winners of the biggest soccer fiesta.

Earlier, the FIFA President said he was in Lagos with his team, not only for the FIFA Executive Committee Summit, but also to discuss with the NFF on the possibility of developing some projects in the country.

He commended Governor Ambode for his administration’s investment in the development of football, describing it as excellent.

“It is for me a pleasure and honour to be here today in Lagos to meet you; I know you are a great football fan. You’re more than a football fan, a lover of football and that’s why I needed the meeting to hold in Lagos.

“We are here on one side to discuss with NFF a few projects on Nigeria football and how we can work together with CAF as well to improve football, even though you don’t need it because your football is already excellent, but one can always try and do something more and other projects we would discuss with the Nigerian FA. In addition to this, I would like to thank you for welcoming us for the FIFA Executive Committee Summit,” he said.

Infantino who was accompanied by the Secretary General of FIFA, Fatma Samba Diouf Samoura and CAF President, Mr. Ahmad Ahmad said the Summit, which would bring on Tuesday, February 20, would feature top executives and General Secretaries from 15 to 20 Football Associations from Europe, North America, Central America and also Africa adding that it was part of FIFA’s new democratic system to discuss with stakeholders on the future of global football.