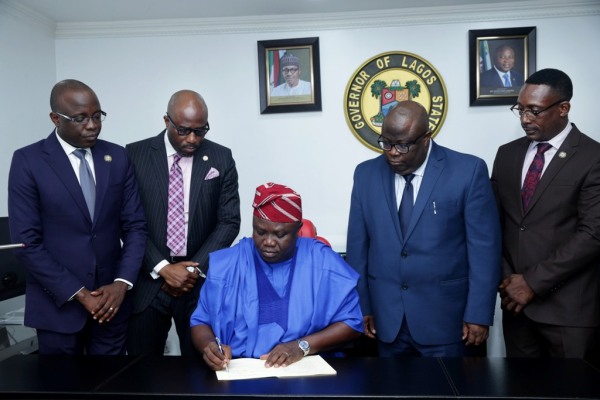 The law also regulates the provision of an efficient transport delivery system and ensures availability of a safe and affordable transportation system. It is hoped that with this law, an efficient integrated transport management system will evolve in the State.

On the other hand, the Teaching Service Commission Law 2018 provides for the control and management of teaching service matters in the State, and for connected purposes.

The law regulates and co-ordinates the management of teaching service matters and provides uniform guidelines for the effective management of Post-Primary Schools in the State.

Governor Ambode, while presenting the 2018 Appropriation Bill to the State House of Assembly, had pledged that his administration would make every effort to complete all ongoing projects as well as initiate new ones to consolidate on the development recorded in the last two and half years.

He said the budget, christened as “Budget of Progress and Development”, would be used to consolidate on the achievements recorded in infrastructure, education, transportation/traffic management, security and health sectors, among others.

Outlining the key components of the budget, Commissioner for Economic Planning and Budget, Mr. Olusegun Banjo said capital expenditure would gulp N699.082billion, while N347.039billion would be dedicated to recurrent expenditure, representing a Capital/Recurrent ratio of 67 per cent to 33 per cent and a 28.67 per cent increase over Y2017 budget.

He also listed key projects captured in the 2018 Budget to include the Agege Pen Cinema flyover; alternative routes through Oke-Ira in Eti-Osa to Epe-Lekki Expressway; the 8km Regional Road to serve as alternative route to connect Victoria Garden City (VGC) with Freedom Road in Lekki Phase I; completion of the on-going reconstruction of Oshodi International Airport Road into a 10-lane road and the BRT Lane from Oshodi to Abule-Egba.

Under the budget, there are provisions for completion of the five new Art Theatres; establishment of an Heritage Centre at the former Federal Presidential State House recently handed over to the State Government; a world class museum between the former Presidential Lodge and the State House, Marina; construction of four new stadia in Igbogbo, Epe, Badagry and Ajeromi Ifelodun (Ajegunle) and completion of the on-going Epe and Badagry Marina projects.

On Housing, there are provisions for completion of on-going projects especially those at Gbagada, Igbogbo, Iponri, Igando, Omole Phase I, Sangotedo and Ajara-Badagry under the Rent-to-Own policy, among others.

Also speaking, Commissioner for Finance, Mr. Akinyemi Ashade put the projection for revenue (IGR) at N897billion, while the remaining part of the budget would be funded by deficit financing.

”Today is a good day in our State, the Governor just signed the 2018 Appropriation Law. For the first time the Law has about N1.046trillion as total amount that we would spend in 2018.

“The Budget is tagged “Budget of Progress and Development” and in terms of capital and recurrent expenditure, we have 63 per cent Capital and 37 per cent Recurrent and that shows that we are really big on infrastructural renewal.

“In terms of revenue, we are expecting a total of N897billion both from the State and Federal receipts, so the rest would be funded through budget deficit financing. We are focusing this year on completing all projects that we have started knowing fully well that people would say that this is an election year, but the Governor is focused on delivering the dividends of democracy; we are not slowing down, we want to really ensure that we touch every aspect of Lagos that needs to be touched in terms of infrastructural renewal, welfare and other things that the Governor promised,” Ashade said.